I'm sure "wood" has the same euphemistic connotations in American English as it does in British English. In fact, I would imagine the other meaning is a transatlantic import back to the old continent. So, I can't believe the designers and writers at Skybox didn't know exactly what possible interpretation they were flirting with when they named this insert series.

OK, so they were probably going for a riff on the film title Boyz n the Hood that was released in 1991. But, this was eight years after that film and it really feels like every other punning name for an insert series had been taken so Skybox came up with this risque take.

And the 'cards' are weird too. I think this is the front. 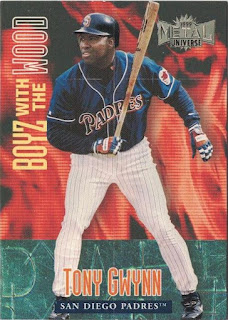 Which makes this the back. 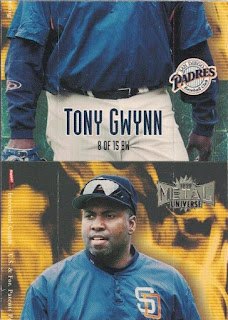 As far as I can work out, from the folding guidelines, this is meant to be manipulated into a second card by basically bending it into shape. I can't find an image on Google of one that has been constructed and the picture on Baseballcardpedia is actually of the Tony Gwynn card looking like this. According to that page, the odds of finding one of these cards was 1 in 18 packs.

This is from the same set as the MLPD unscannable insert card that was basically the reason why I asked for an overhead scanner for Christmas. However, unlike the MLPD card this doesn't have a cardback, which means no whacky write up this time. Baseballcardpedia blames the tendency towards weird comments on the back of the Skybox and Fleer cards of the time on an attempt to make cards more appealing to younger collectors. I totally agree with the wiki writer's summary that "The language used on cardbacks has not aged well." Although I doubt it was ever appropriate really.

As with the Upper Deck bobblehead card, I'm going to want a second one of these so that I can bend it to get the second card for display in my binders. Maybe Skybox were onto something with this insert idea. It's just a shame they chose such a terrible name for it.

And, annoyingly, this is yet another set where I have inserts but don't have the base card, so that's another one to try and find.

Posted by Jongudmund at 8:28 AM