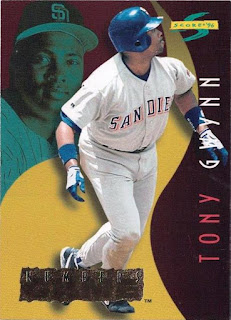 A very 90s design with the colours and the swirl and the photo composition.
What do I love on a cardback? Factoids and stats! These are golden. 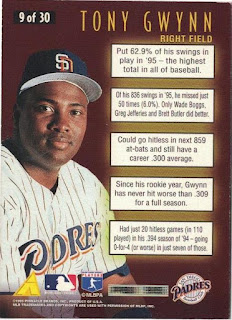 I know that pitching has changed in the 20 years since Tony retired, but the sheer number of strike outs in games this season does make me wonder if anyone will ever rack up numbers like this for successful swings again. I imagine most players miss at least 50 times a month these days, let alone 50 times a season.
I'm particularly struck by the stat that he could have decided not to hit a ball in his next 859 at bats and still have a career average of .300. I doubt he would have become a Padres legend if he had adopted that tactic. Anyone who saw Tony have a hitless game then saw a rare occasion - he had one hitless game in every 5 or 6 games during 1994. No wonder he attained an average of .394!
Total: 661 cards

Posted by Jongudmund at 7:39 AM