A theme post featuring two cards with holes in.

Topps used the same technology as in their Topps Laser set from the same year for this 8 card insert series in Stadium Club. 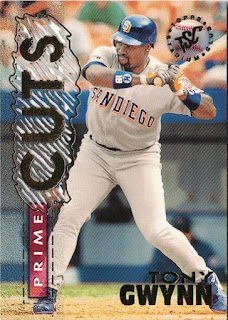 The photo shows Tony's brief mid-nineties flirtation with a beard.
The white lines around the solid gold 'CUTS' are all holes through the card.... as you can see from the back view. 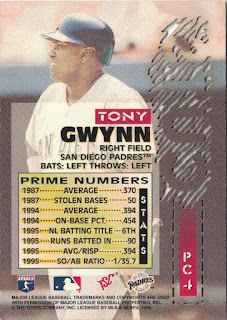 Tony is cleanshaven in the photo on the back. I find it slightly amusing that this juxtaposition happens on a card along the theme of 'cuts'.
These cards are 'Prime Cuts' and the stats on the back are 'Prime Numbers', except none of them are actually prime numbers in the proper mathematical sense.
Yet again, the sheer paucity of strike outs in Tony's career is remarkable. I've not seen a strike out to at bat ratio on a cardback before, but card companies should have included it more often. In 1995, Tony struck out once every 35 at bats. If he had 5 at bats in a game that would be one strike out every seven games.
The only confusing stat on the back is the batting title one. They are trying to say that Tony won his sixth National League batting title, but it looks like they are saying he was sixth in the batting tables. However, I'm not going to quibble too much with that, given how good this stats box is overall.
Card Number 651: Pacific Aurora On Deck Laser Cuts, 1998; #14
A couple of years after the Stadium Club Prime Cuts card, Pacific lasered bits out of these insert sets from their Aurora set. 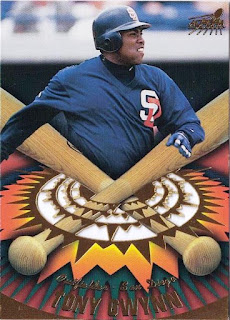 The card front is a rather glorious mish-mash of photoshop elements and the cut out 'rings' in the centre of the card. There is some gold foil applied as well for good measure.
The back has a big picture of Tony and a tiny write up underneath the lasered out section. 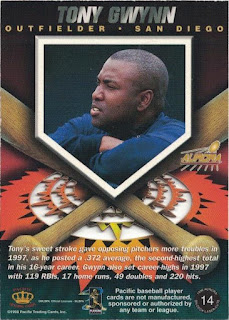 I have grown to love Pacific cards. True, they are gaudy and the designers never seemed to know when to stop adding stuff, but that is part of the charm. Plus they were absolutely brilliant at including the years and set names in those little circles with the card number on. It makes them so easy to identify and for that reason alone, I could forgive any excess in the design.
Aurora cards were one of the sets Pacific produced without a licence initially, which is why it just says San Diego on the card. However, this was before companies with licences got really protective about the official MLB team logos and icons, which is why the logos on Tony's shirt and helmet haven't been airbrushed out of the photo on the front. Those dark days of airbrushed jerseys were coming.

Posted by Jongudmund at 7:59 AM