Back in the 80s Topps produced All Star cards that were inserted into their cellophane wrapped multipacks of cards ('rackpacks') so that you could see the card in question. That was helpful if you had one particular favourite player, or were collecting the set. It also meant an extra Tony Gwynn card to collect in the seasons after he was an All Star.

This card has a varnish finish to make it glossy, however Tony's skin is noticeably shiny too! Although this looks like it was taken outdoors, I suspect that shine is caused by a lamp rather than the sun. It looks unnaturally lit. 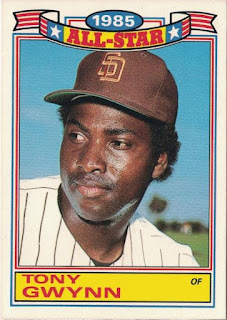 The back is as boring as any other of these cards. The quirk with these is that they commemorate the game the year before, so it says 1985 in big numerals but it was released to accompany the 1986 flagship set. 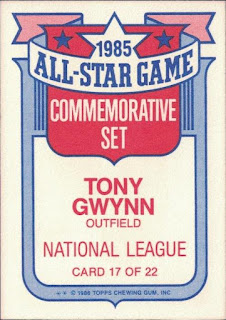 This card arrived in a joblot along with a couple of other All Star cards that I blogged previously. However one of them was the card from 1985. My previous copy had discoloured, so the new one is now in my binder as an upgrade! It also has better centering. 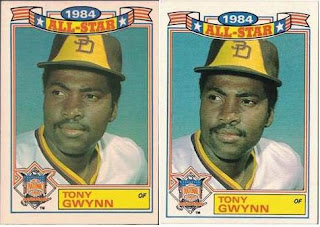 Weirdly, I think Tony looks yunger in the photo on the card from 1986 than on this one commemorating the 1984 All Star game that was released in 1985. That's partially because he has shaved off his moustache. I think the shiny complexion also makes him look younger. I'm fairly sure it is a later photo, though. His uniform on the card from 1985 is the 1984 uniform, but the card from 1986 shows Tony in the pinstripes that the Padres adopted in 1985, and the plain brown hat is another indicator.
I now have four of these cards, from 1985, 1986, 1987 and 1990. They look quite good together, so I have rearranged my binder to group them. 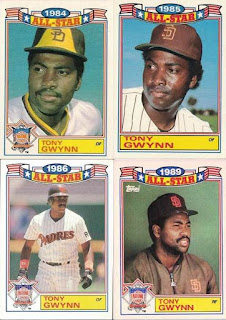 Looking at all four cards together, the card released in 1986 is different to the others. Tony's name is in a bigger font size and there is no National League logo. It reappeared the following year.
I'm also never sure whether to hyphenate 'All Star'. Topps do on these cards, but they don't always hyphenate it, even on cards released in the same year. Other card companies are just as inconsistent, and reviewing my previous posts about All Star cards, so am I!
Total: 637 cards

Posted by Jongudmund at 8:07 AM

Email ThisBlogThis!Share to TwitterShare to FacebookShare to Pinterest
Labels: 1986, All Star Card, Topps