Fleer have fun with puns

I imagine the ideas meetings at Fleer Corp were fun occasions, given what sometimes resulted. How about an insert series that was basically a pun?

I imagine the brief for the designer went something like this.
"It's consummate prose, see. You know like how people say a guy is a 'consummate professional', like that!"
"Yeah, but you don't spell pros with an 'e' on the end, that's like writing."
"Yeah, yeah, yeah, we know. I dunno, put him on a scroll or something."
"Put... him... on... a... scroll...er....okaaaaaaay."
And voila! 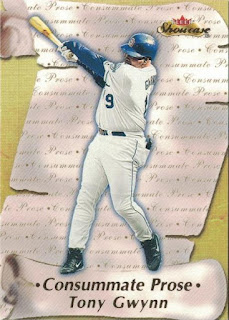 In it's favour, this card looks a bit different. It might have worked better if the scroll had been covered in some actual prose instead of the words 'consummate prose' repeated over and over.
But then they wanted to save the prose for the back. 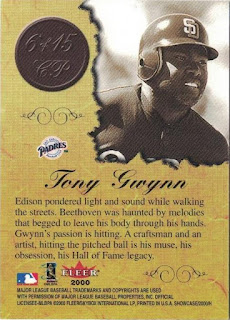 I'm used to reading comparisons between Tony and his contemporaries, or with baseball legends of yore. I think this is the first time I've read comparisons with Edison and Beethoven.
Fleer employed some florid writers at the time. Usually they were let off the loose on Skybox or Metal Universe cards, but sometimes they got to liven up Fleer's short-lived random ranges as well. This is one of those times.
Total: 652 cards