I like marking milestones on my blog. This is my 300th blog post since starting on 9th May last year. I thought I'd celebrate by blogging my first card with a picture of Tony as a basketball player. 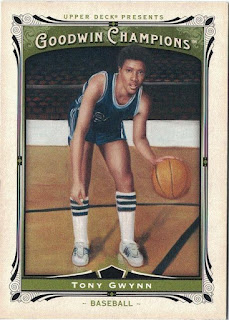 Most photos I've seen of Tony playing college basketball he is wearing a white jersey. The blue top he's wearing in this photo doesn't seem to say Aztecs on it, so I don't know the provenance of this photo.
However, it's worth recounting that Tony attended university in San Diego on a basketball scholarship and wasn't allowed to play baseball in his first year. He still holds the San Diego State University record for assists. And when he graduated, Tony was drafted by both the Padres and the local NBA franchise, the San Diego Clippers (now the Los Angeles Clippers). Several people who contributed to the book He Left Hs Heart in San Diego opine that Tony preferred basketball as a sport to watch. He regularly watched the Indiana Pacers, as his family often spent a lot of time in Indianapolis in the winter.
None of this is mentioned on the cardback. 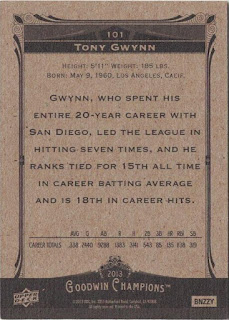 In the eight years since this card was printed, Tony has dropped to 20th on the all-time ranking for career hits. He was overtaken by Derek Jeter, who reached number 6 in the rankings before retiring, and Albert Pujols, who needs less than 100 hits this season to climb to 9th in the all time rankings.
One reason why Upper Deck printed this card with a photo of Tony posing with a basketball is because it was a neat way to get around the lack of licensing. A few years previously, Upper Deck reacted to Topps buying sole licensing rights to Major League Baseball by printing cards anyway. They thought they could do that with the rights granted by the Major League Baseball Players Association, but then Topps sued them for using MLB logos and team names.
One of the cards in the middle of this legal tussle would have been from the first Goodwin's Champions set released in 2009.
Card Number 631: Upper Deck Goodwin's Champions, 2009; #135 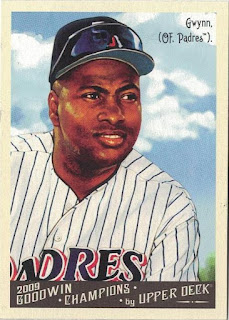 This retro card set is printed on old-fashioned card stock. This is very noticeable when the card is turned over. 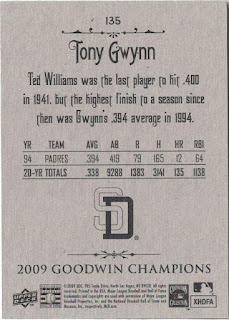 The alignment of factoid and one-line stat box earn this card a bonus point. If a card mentions a particular year, it makes perfect sense to just show that year's stats.
There are five lines of boilerplate legalese at the bottom of the card and the logos of two licensing organisations - the MLBPA and the Cooperstown Collection, which I think sells rights to retired players who have been inducted into the Hall of Fame. All that wasn't enough to protect Upper Deck from getting sued, however. They haven't released a baseball set since. The later Goodwin's Champion sets have included leading sportsmen and women from a range of sports, with a few baseball players included.
Total: 631 cards

Posted by Jongudmund at 9:25 AM