Among the rookies with Upper Deck

The Upper Deck set in '98 was released in three tranches - Series 1, Series 2, and the third series was known as the 'rookie series'. Although it had some players who were well past being rookies. Some of those players got put in a subset called 'Eminent Prestige' (which was apparently "unintentionally shortprinted"!). 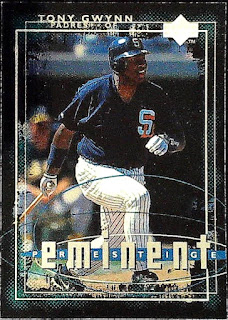 It's very shiny so I used the overhead scanner on the front. The way the subset name goes across Tony's legs make it look like he's kneeling down instead of just starting his run towards first base.
The back has a truncated stats box, that includes the previous ten years and doesn't give full career totals. That's a tad unusual. The photo on the back looks like a posed photo - considering this was a subset about eminent players, it might have been a better choice to include it on the front. 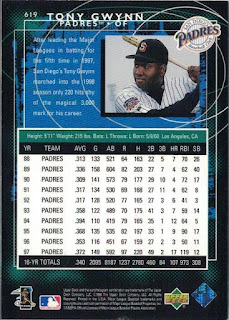 The ragged-edged blue background and swirling circles firmly root this card in the late 90s.
The Rookie series started numbering at 540, so I think Upper Deck made a deliberate choice to have Tony Gwynn at number 619 in the series. They get a bonus point for their attention to detail!
Card Number 1014: Upper Deck, 1998; #AS19
This card was also from the rookie (third) series of the Upper Deck flagship set - this time an insert card. It's another shiny card, so it got the overhead scan. I'm not overjoyed by these scans but at least you can see all the details of the card including the jade green colour of the foil. (The flatbed captures none of it.) 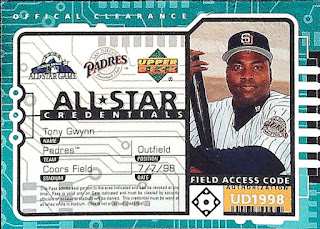 The design is reminiscent of a fancy security pass giving Tony access to the field for the All Star Game. Tony was a perennial selection for All-Star teams throughout the 90s, and he featured in his last All-Star Game after the season this set was released - although he was unable to play. Instead he helped his hero Ted Williams throw the ceremonial first pitch. 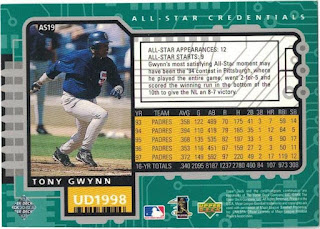 This card range has one of the most horrible numbering systems ever. Basically the same cards appear three times with different finishes and all have different numbers. I'm not sure what the design is meant to be on the front. It looks like a steampunk TV. (Was steampunk a thing in 1998?) There were numbered die-cuts produced as inserts in the set, so the card has been desinged with the die-cutting process in mind. 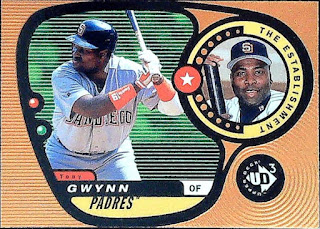 On the back is the numbering. This card set could be compiled in three different ways. I am going off the set number because that's the one that makes sent. None of the numbers have a 19 in them. (Boo!) 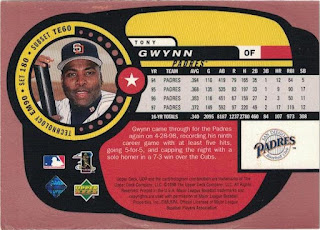 Posted by Jongudmund at 8:23 AM