One card only - a grandstand great

These insert cards had rounded corners as befitting an 'old timey' retro set. Fleer Platinum was marking Fleer's 20th year producing baseball cards - the base cards recalled the 1981 template. On this insert the picture of Tony has been laid over a vintage photo of a baseball stadium. I never visited Jack Murphy Stadium, but I know that isn't a picture of it. The same picture appears on all the cards in this insert set. 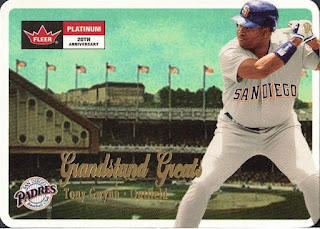 The cardback write up is remarkably restrained considering it's a Fleer card. 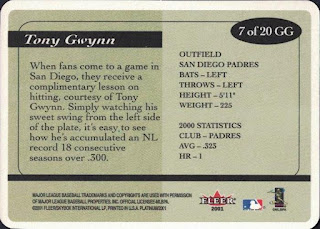 Fleer Platinum was successful enough to continue in subsequent seasons. I can see its appeal. The cards are neatly understated, printed on retro card stock, with good photos and not too big a set list. Fleer managed to get the retro feel right, and make it timeless.
Total: 1024 cards
Posted by Jongudmund at 11:38 AM