Upper Deck's fun range, known as 'Collector's Choice' had a few gimmicky things like bobbleheads and various competition giveaways. Let's start with the second 'bobblehead' to feature on this blog and then go back in time to see some other bits and bobs...

I have some of the little bobblehead cards from 1999 (including one that has been pushed out), but I didn't realise that Upper Deck made these inserts in 1998 as well until Glenn sent me this a couple of weeks back. 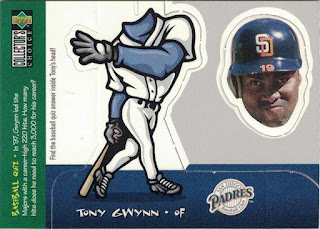 Upper Deck made sure Tony had his game face on for this bobblehead. It was only when I realised that Tony's disembodied head was in a batting helmet, that I realised the 1999 version is meant to show Tony fielding!
On the back are the intructions on how to assemble the bobblehead for display. 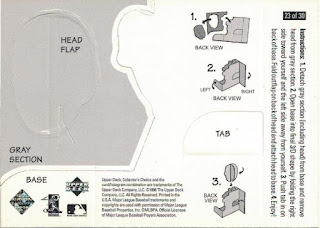 These bobbleheads were in Series 2 of the Collector's Choice set and only appeared in 1 in 3 packs.
Upper Deck sometimes included odd things in their regular sets as well. In 1996, collectors had the chance of winning a shiny foil card.
Card number 1022: Upper Deck Predictors Redemption, 1996; #R57
There were 60 cards that could be exchanged for instant win cards found inside Upper Deck packs. 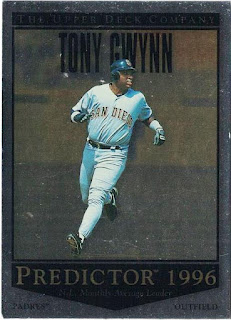 For some reason I haven't got an overhead scan of this card in my folders, so this dirty desktop scan will have to do. Some of the marks on this card are dust and fluff on the scanner surface.
The back is relatively plain, but neatly laid out. The write up begins with Tony's incredibly low strike out rate. 88 times in 5 years! 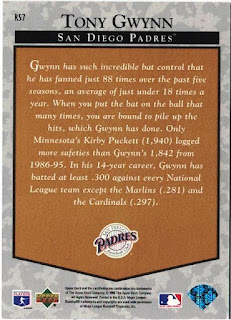 This card arrived in a small box of cards from Gawain way back in November 2021. Six months later - thank you, Gawain!
Card Number 1023: Upper Deck Collector's Choice You Crash the Deck game piece, 1994; #unnumbered
You Crash the Deck (later Game) was a scratch off and win redemption thing that ran in Collector's Choice (with some adpatations) for several years.
There were 15 different varieties of this "game piece" each featuring two players. Tony shared the spotlight on this with Andres Galarraga from the Rockies. 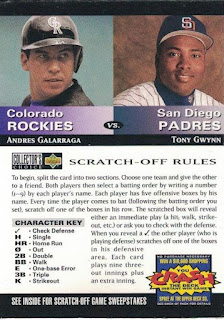 This card sized 'game piece' folds out to reveal a large number of scratch off areas. The most important one is the one saying whether it's a winning card. That is the only bit that has been scratched off. 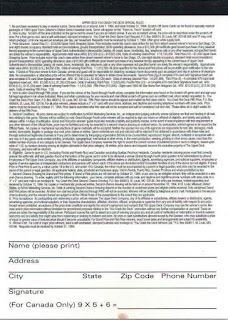 Why were Canadians set a relatively simple maths question? I presume there is some rule about giveaway competitions that meant there has to be a quiz question. Otherwise that's just weird!
Total: 1023 cards
Posted by Jongudmund at 3:35 PM