The first card I posted was from the Topps set in 1987. I chose that card because the first baseball cards I ever bought, while on a childhood holiday to America in 1987, were from that set. The card has a terrible photo of Tony on it where he has no visible distinguishing features.

Two years later, and I have a chance to revisit those cards from 1987 with the most recent card to arrive in my collection. Marc sent me the card (thanks, Marc!) and it arrived towards the end of April. The card is from the most recent Topps flagship set where the company are marking the 35th anniversary of the release of the set in 1987. That makes me feel a bit old, thinking that me buying those cards in Florida was 35 years ago! 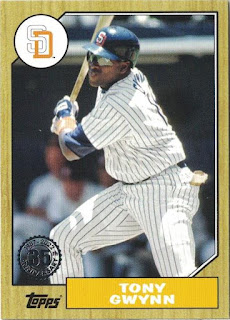 Unlike the card from the 1987 set, at least Tony's face is visible in this photo. It would have looked better with the 1987 style logo. The photo is also from the 90s rather than from 1987. It's all setting off the anachronism klaxon!

Topps really bodged the back as well. It looks like the back of a card from 1987, but the designer only included a selection of years on the back. Given that Tony was active in 1987, they only needed to include the years from 1982 to 1986. They would have had space for a factoid then! 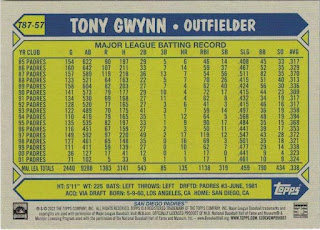 Even though the card has limitations, it felt like a nice way of marking the anniversary of my blog, and, of course, celebrating what would have been Tony's 62nd birthday!

Posted by Jongudmund at 7:28 AM