One card only - American Pie

Topps American Pie was a short-lived range that featured a mix of subjects - baseball players, celebrities and cards denoting historical events. Topps still produce sets like this, notably their Allen & Ginter ranges. In 2002 the set only included retired players and as Tony was in his first year of retirement, he got a card. This is despite him having a card in the Topps flagship set that year! 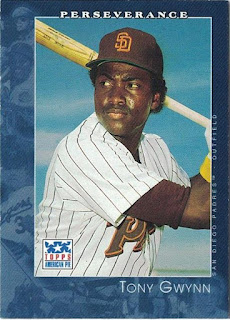 All the baseball players featured in the set were assigned a characteristic or quality. Tony got 'perseverence'. Topps used a photo that looked like it came from the photoshoot used for the "glossy" All Star card in 1986 because it has been harshly lit and Tony's skin is reflecting the light source.
As cardbacks go, this is an understated design. Some people might even describe it as dull. 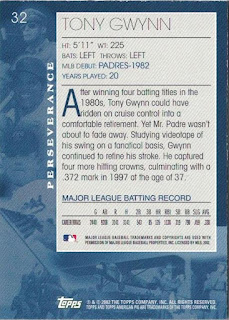 It's a good little write-up though, and ties in to the theme of perseverence.
Total: 1008 cards

Posted by Jongudmund at 9:11 AM