Staying in the Club

Fuji commented on yesterday's post saying how much he likes Stadium Club cards. So this post is for Fuji!

Tony featured in this 50-card set that was only sold to members of Topps' Stadium Club. According to Baseballcardpedia, in 1994 Topps issued 50-card sets of baseball, football, or ice hockey players, and members could choose one set as part of their membership. They were also given the option to buy the other sets. The 'Members Only' card design is different to the main Stadium Club release in 1994. 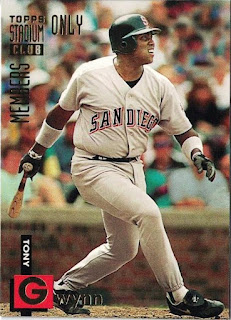 I suspect the guy who wrote this cardback was later headhunted by Fleer/Skybox, because the Picasso references are reminiscent of the fanciful cardbacks found in their ranges. It looks like Tony is signing a baseball card in the photo - I hope that card is treasured somewhere. 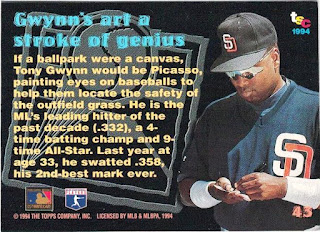 The cardback doesn't add in this context, but Tony's "2nd-best mark ever" in 1993, wasn't enough to win him the batting title that year. His second run of four titles in a row began the year this card was released!

And now for something a little bit different - not a new card, but one that looks new.

Last year I acquired a number of cards close together, so I'm not sure where this came from, but it was in a job lot of cards. When I saw it, I thought, 'ooh, that's a variant'. but weirdly, it's not. The card in question was this one: 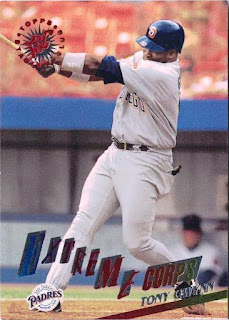 This is a card from a subset in the 1995 Stadium Club set, where various players were recruited into the "Extreme Corps". I thought this might be some kind of foil variant, except the only variation I can find listed is a silver versus a rainbow foil variant. These cards are both rainbow-ish, albeit covering different parts of the spectrum - the blue end and the red end. 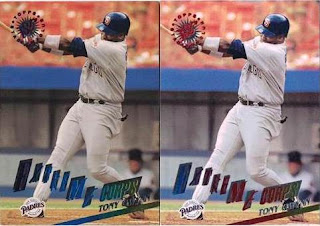 So, although this isn't a new card, I've put both of them in my binder. They look different enough due to the foil colouration and look nice next to each other. Of course, I've also now learned that there is one with just silver foil on, so I am going to have to keep an eye out for that too. And any other colours of the rainbow!
Total: 1012 cards