I am feeling a bit guilty at neglecting this blog, but life gets in the way sometimes. I had a very busy April, including working my notice before switching to a new job and various other activities that took up my time. I also haven't acquired many new cards - just one new one arrived in April.

However, I do still have a little backlog of cards to work through. Today's post features a couple of cards from when Summit was a Score brand rather than a Pinnacle brand - although they were all the same company underneath anyway. 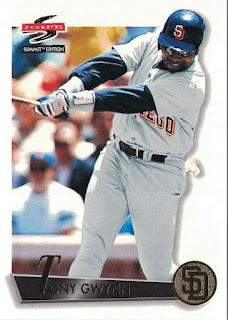 There were 200 cards in this 'hobby exclusive' set. 173 cards were 'base' cards like this. The foil team logos made them slightly fancier than regular Score cards that year. The Pinnacle companies love affair with foil on cards was only just starting.
The back has a candid photo of Tony and a monthly breakdown of his 1994 season.The September / October column is full of zeroes because no games were played in those months due to the player strike that cut the season short. 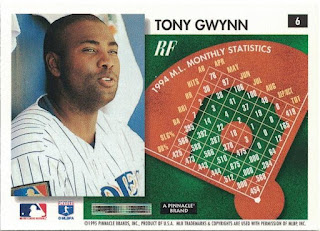 I'm a fan of different ways of representing data on cardbacks, and so this card gets a bonus point for the way the back is laid out.
In addition to cards like this there were two 'subsets' in the 200-card base set. The Bat Speed subset also featured Tony.
Card Number 1007: Score Summit Edition, 1995; #183 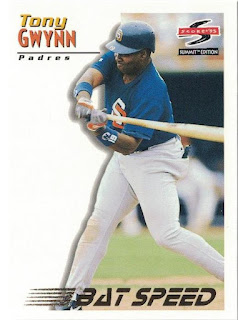 The white background blends into the card border on the front, which isn't particularly striking. However the way Bat Speed is written as if it's zooming in from the edge of the card is charming.
On the back we get a photo of Tony swinging through. 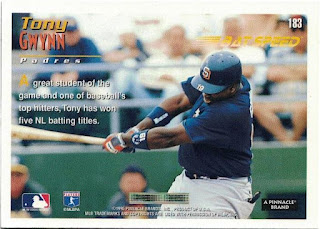 Neither photo is particularly good, considering it's a subset about batting. The angle of both photos means Tony is looking down and his face is obscured by his batting helmet.
In subsequent years Summit was the name of an actual set, rather than being linked to Score. So these cards come from an interesting evolutionary moment as the set emerged into the hobby.
Total: 1007 cards
Posted by Jongudmund at 4:25 PM