One card only - game-worn Gold Label

I'm not sure how it has been two and a half months since I last blogged. Anyway, I'm hoping to restart this soon. I have about 50 cards sitting to be blogged, some of them for several months. But today's card only arrived at the start of July from my friend Gawain.

This 'Major League Moments' insert card has been printed in a dark purple tone, rather than this just being a dark scan. 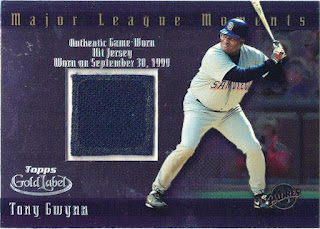 Unlike modern cards with their little cloth swatches of unknown origin, this card specifies the date it was worn - 30 September, 1999.
On the back it explains why that date is meaningful. Tony got 7 hits from 8 at bats over two games in a double-header at the end of the season. 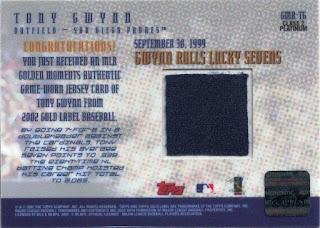 This card was released in 2002 and Tony had retired at the end of the 2001 season. However, news seemed to take a while to get through to Topps HQ. Tony had a card in the Topps flagship set in 2002, and this card may well have been lined up before they knew he had retired.
Also, you may have spotted this is a "class 2 platinum" card. Gold Label cards are divided into all kinds of classes and subdivisions. I think the platinum ones were meant to be rarer.
Total: 1025 cards

Posted by Jongudmund at 4:41 PM