The season after the sunset season

I'm not sure where I read about 'sunset seasons' - that's where a player signs on with a team for one final year at the end of their career. They usually have a few cards issued in the new team's uniform, and those are something a bit different to collect. I know I read a blog post about them a while back and the term stuck with me.

Tony Gwynn didn't have a 'sunset season' in that sense, because he stayed with the Padres the entire length of his career. However, his final season, in 2001, was restricted by injuries. He had to have fluid drained off his knee after most games - sometimes he would have the procedure on the 'plane home.

He still appeared in 71 games, but he only made 112 plate appearances in that final season, with 33 hits. In comparison, he only played 36 games in 2000, but he made 140 plate appearances and recorded 41 hits, so had a better output from half as many games.

Tony's retirement was announced quite early in the 2001 season, on 28 June. However, that news seemed to take a long time to get processed by some of the card companies and he still appeared in a couple of sets in 2002. This was before card companies dropped retired players into their flagship sets as a matter of course, although it may have been a deliberate choice by the companies to honour a player of Tony's stature within the game.

Fleer went with a photo of Tony making a very athletic looking leap on the front of their Ultra card in 2002. The foil panel with his name in doesn't scan very well. 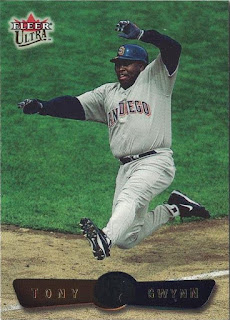 Fleer definitely decided to make this card as a 'tribute' to Tony. They deliberately gave him the 19th card in the set, and they referenced 2001 being his final season on the cardback. 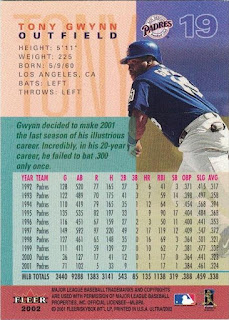 The stats box only showed the latter half of his 20 year career. As ever, I question the point of having a stats box that shows only part of a career. However, this card earns a lot of bonus points for being #19 in the set, which offsets the stats box issue.
Card Number 390: Topps, 2002; #99
One day I will do an actual tally of the number of Topps base cards that didn't show Tony's face. There are loads of them. This photo is taken from an angle, where but for the sleeve patch, it could easily be dropped onto an unlicensed card without infringing any copyrights. 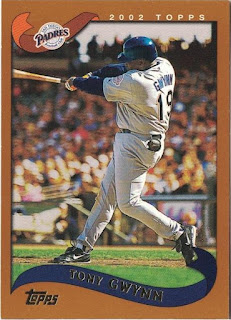 Also, and this is a minor gripe compared to the choice of photo, but the blue ribbon with his name on curls up and over his foot. I realise it's the card template and would have been difficult to change, but it looks messy.
There is no reference to Tony retiring on the cardback, although there is a complete stats box. 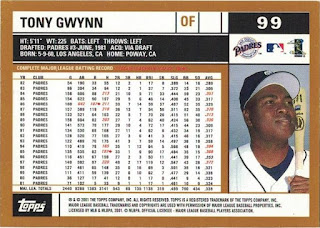 The complete non-referencing of Tony's retirement and the inclusion of his stats like on any other player's card honestly make me wonder if Topps knew he had retired.
Still, it's fun to look at these cards from the season after Tony's sunset season.
Total: 390/394