One Card Only - penultimate O-Pee-Chee

For many years O-Pee-Chee reprinted Topps cards, but then for a couple of years in the early 1990s they produced their own sets. This was the penultimate set O-Pee-Chee produced before they ceased printing cards after the 1994 season. 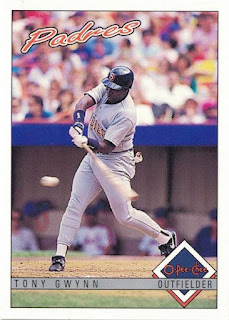 Tony is about to hit that ball that is flying towards him in the photo. The players sitting in the dug-out behind him look like they are in Mets uniforms. 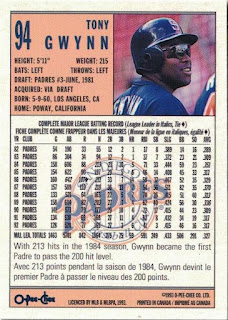 As this card is "Inprime au Canada", the factoid on the back is in French as well as English. O-Pee-Chee borrowed a Topps approach to factoids, by talking about a season 10 years previously.
The player to Tony's right, with just his shoulder in the picture, has a name beginning with H and the top of a 4 visible. It's the same blue uniform. In 1992. Tony's team-mates included Greg Harris (46) and Bruce Hurst (47). They were both taller than Tony, so the fact he is looking up at them isn't a clue as to which one it might be.

Email ThisBlogThis!Share to TwitterShare to FacebookShare to Pinterest
Labels: 1993, base card, French, O-Pee-Chee