Modern Monday - The Art of Hitting

I mentioned yesterday how two fellow collectors contacted me on the same day last week to ask if I wanted a Tony Gwynn card they had available. Russell was a bit hesitant in his offer because the card in question was unlicensed. However, that isn't an issue for me, and when an unlicensed card looks as good as this one, who cares about logos? 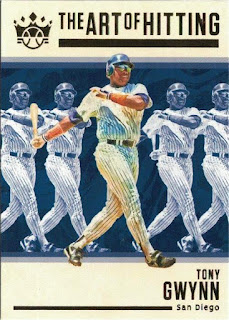 There are 10 cards in this insert series. It's especially relevant to Tony who wrote a book called The Art of Hitting. I remember reading a comment that Tony should have called his book the Science of Hitting instead of the Art, because he took a very methodical approach to the game and applied trial and error to everything. However, Ted Williams had already used that title for his book about hitting, which Tony read and re-read multiple times.
Diamond Kings cards are all 'illustrated' in a similar style now and no artist is credited with designs like these. I like the way the image has been replicated on the cards in this insert series, although in this case it does look a little bit like a chorus line. (My wife, Cathy, said "Ooh, he's dancing!" when she saw it.)
The image features on the back as well. 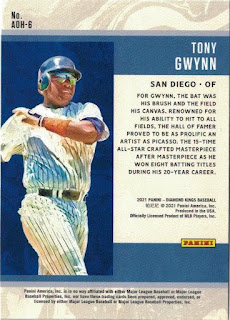 Now I'm known as someone who reads cardbacks and has a passing interest in cardbacks that feature other languages besides English. Have a close look at the copyright notice and it looks like there are some hanzi or kanji letters there.

I would like to know if that is Chinese or Japanese, or neither. I'd be very happy to add that tiny bit of non-English to my list of languages that feature on Tony's baseball cards.
A big thank you to Russell for sending me this card. It takes me up to 6 cards issued in 2021 in my collection.

Posted by Jongudmund at 8:40 AM