Happy Birthday Mr Padre and to this blog

One year ago, I started this blog with the intention of collecting 394 Tony Gwynn cards. A year later, and I am about to show you my 672nd Tony Gwynn card; 278 over my target! I had 179 cards when I started, so I have acquired 493 cards since launching the blog - a whisker away from 500. That's not bad going for a year.

This is my 331st blog post, which included a run of posts every day from 9 May 2020 to 9 January 2021, which I calculate at 245 days in a row. I passed the 394 card mark in October and carried on. As of this morning, when I published this post, there had been 684 comments on the blog - and I'd like to thank those of you who have commented, particularly Fuji who has added his thoughts to almost every blog post. I really appreciate that commitment and all the nuggets of wisdom he has posted.

I was hoping to celebrate my blog birthday (blogaversary?) with a Project 70 card featuring Tony, but unfortunately the postal service has not delivered. So as of now, I have maxed out my cards to be blogged folder by presenting this rather shiny offering from DonRuss.

The Elite Series cards were inserted into packs of DonRuss flagship cards during the first wave of cards (Series 1). 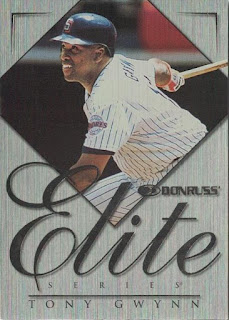 The cards are serially numbered out of 2,500. That seems quite a high print run compared to the kinds of print run seen today, but back then this meant the cards were considered rare. 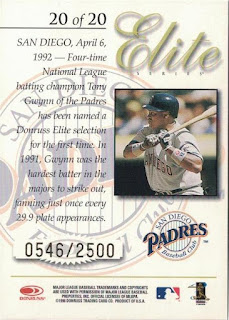 The cardback notes that Tony was included in one of the 'Elite' insert series for the first time in 1992. DonRuss must have felt that was quite a honour to bestow on a player. Tony's low strike out rate in 1991 earned him the spot among the Elite. It was impressive - as Tony went almost 30 plate appearances between strike outs. I think most of the current Padres team have more strike outs already this season than Tony usually experienced in a year.
So that's the first year of this blog done and dusted. Thank you everyone who has been part of this! (There is a list here - I think I have mentioned everybody!)
Total: 672 cards
Posted by Jongudmund at 9:31 AM