I haven't decided to do this blog in any kind of order, but I have decided to try and group cards  according to some logic. So this post is going to be Tony Gwynn's Topps base cards in my collection up to the 1989 set. I want to say thank you to Bill in New Mexico for sending me a couple of these.

The 1983 Topps card is Tony's rookie card, which I have already blogged about. 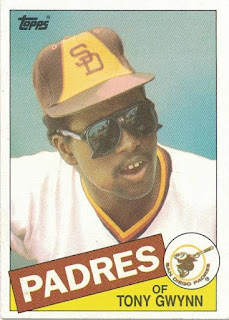 I recently read a blog post on one of my favourite card blogs, Night Owl Cards, about how many players had a better third year card than a rookie card. This is definitely a better picture of Tony than the one he had on his 1983 card, with one caveat. Night Owl mentioned the chewing wad in his cheek and how it links to his untimely death. (Tony died of cancer of the salivary gland. His family sued the tobacco industry after his death. There's a write up in Sports Illustrated here - TW, it's graphic in its description of the damage caused by cancer.)

Still as a card, there's a lot to love about it. The name and team name are in the club's colours, matching Tony's hat perfectly, and the logo is the Swinging Friar, still my absolute favourite Padres logo.

The back of the card shows Topps 'eclectic' (or 'weird') approach to factoids. 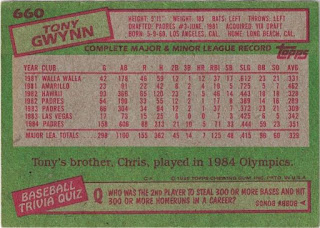 Of note, in 1984, Tony played in the World Series, the first time the Padres ever reached it. Tony hit .351 in the season and led the league. Could have mentioned either of those. Instead, the Topps factoid is about his brother, Chris, playing in the Olympics. 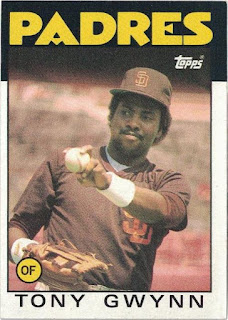 Not much to say about this, except for the second year in a row, Topps decided not to show a picture of Tony doing the thing he was most famous for, i.e. batting. I'm not keen on the 1986 Topps design with its chunky team names across the top of the card. At least the picture confirms that Tony was a leftie. 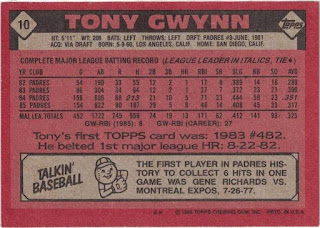 The back is equally unremarkable. The Talkin' Baseball cartoon is cute.

Tony's Topps 1987 card is the very first card profiled on this blog. It shows him in action. Sort of. 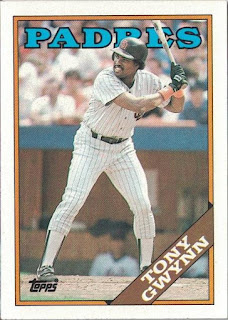 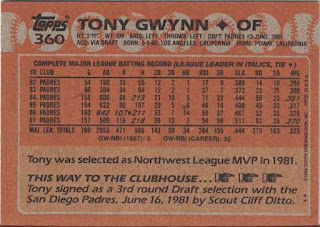 Again, Topps factoid staff make an odd choice. The league leader in hits and batting average in 1987, and they mention his minor league MVP award from 1981. I guess they are assuming people will read the stats for themselves and work it out.

However, there's a nice mention of the Padres scout Cliff Ditto. 1981 was Cliff's twelfth and final year working for the Padres before moving to the Expos organisation where he signed pitching machine Randy Johnson. Imagine being the guy who signed Tony Gwynn and Randy Johnson. If that's not enough, his brother-in-law was hall-of-famer Dodgers player Duke Snider. 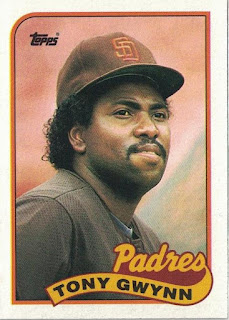 Back to something more like a portrait, here. It's a nice simple card design, though. 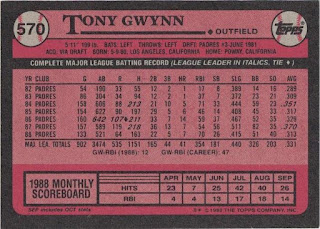 No factoids on the back, just a month-by-month record of his 1988 season. It looks like Tony was on the DL in May, which might be why he played 24 fewer games than in 1987.