One card only: Legend in his own lifetime

Wales has entered a "Fire Break" lockdown to try and beat the rising cases of Coronavirus, which means major restrictions on going outside. I'm not too worried. I still have cards to blog about and am still a way off getting "up to date" with all the cards I've got. It's a Sunday though and that means one card only!

This was a set of the best players from the 20th Century. Alongside several Hall of Famers, some of the biggest current stars had cards as well. Tony actually had two cards in the set. The first 50 cards were the 50 greatest players of the Century and he was number 49 out of 50 (with card #49). The second section of the set were the "Top 50 contemporaries" - active players, in other words. Tony was ranked fourth in that section. Hence, his second card had a big number 4 on the front and was card #54 in the set. 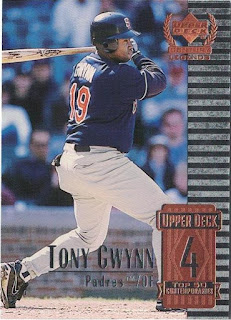 This comment is only relevant because of this year's baseball experience during the pandemic, but the fans in the background of the photo to Tony's right look like cardboard cut outs.
The back is a fairly standard stats box. 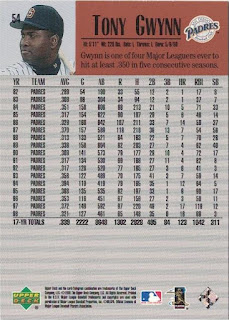 I have a few quibbles with this set. Given that the greatest 50 players seem to have been somewhat arbitrarily selected, Upper Deck could have just selected 50 retired players and 50 contemporaries, rather than doubling up on players. (Alongside Tony, Barry Bonds and Greg Maddux had a card in each selection, for example.)
The set design is nice, overall, but there a couple of little things which detract. The clash of the set number and Tony's hat in the little cameo portrait in the back was avoidable. The gap under the stats box is begging for something to be written there. Looking at online images of card #49, the other card in the set had a little write up filling the gap. So, it's a nice set but could have been better.
Total: 437 cards