Scanning Nightmares: Sportflix (with an X)

In the mid-80s a company called Pinnacle issued lenticular cards called Sportflics. These haven't aged well based on the examples in my collection (none of which are of Tony!) as the lenticular plastic has fogged up a bit and they are prone to cracking.

Shortly afterwards, Pinnacle made their first foray into regular baseball cards with the launch of Score cards, followed by Pinnacle branded cards, and then in 1995 decided to update Sportflics for the overproduction era and put an X on the end of the set name, as Sportflix. Nowadays, the whole Pinnacle family of brands are owned by Panini, who sometimes release cards under the "zombie brand names". I don't think Sportflics or Sportflix have reappeared yet.

Lenticular cards are hard to scan because they rely on movement to reveal all aspects of the design.

This card shows Tony from behind at the plate stepping into a hit, or side on at the extreme end of his follow through.

The scan shows the rear view: 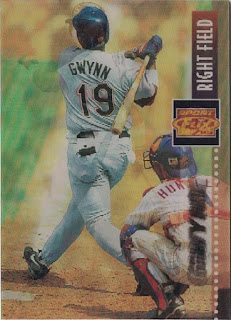 Here's a photo of the card angled to show the other picture: 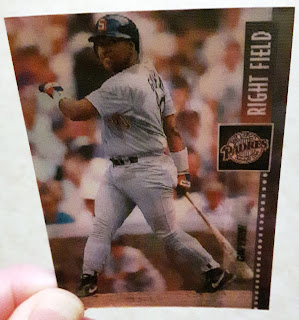 The back of the card has a comment about Tony's .394 batting average in the previous season, and a weird reflection in his Oakleys. 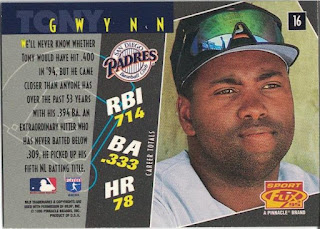 For stats, Pinnacle just chose some career totals to date. He had batted in almost ten times as many runs as he had hit homers at this point.
Incidentally, this cardback was quite hard to scan as well - the plastic on the front makes the card warp and the sides curve upwards, making it difficult to line up on the scanner. I had a few scans with an edge trimmed off but eventually I got an acceptable scan.
In addition to the lenticular cards, Pinnacle also released a set of 3D cards in 1995 as well.
Card Number 429: Pinnacle Sportflix UC3, 1995; #69 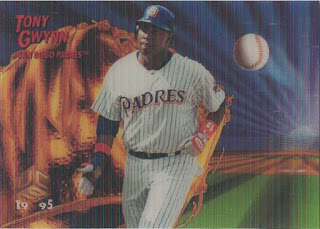 I feel embarrassed by how bad that scan is, but I haven't bothered with a photo, sorry.
The back has a photo that is nicely centred on the Padres 25th anniversary sleeve patch. 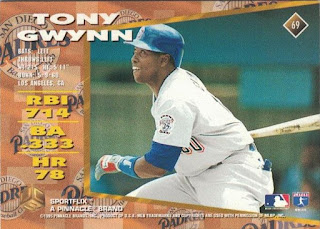 Pinnacle used the same set of career stats on the back but they didn't explain that they were career stats. It's fairly obvious they are as the season record for RBI is a lot lower - 191 set in 1930 by Hack Wilson. (Almost all the RBI season records were set in the 1930s, many of them by Lou Gehrig! 1930 was a good year for batting in runs, with 4 players recording 165 RBI or more.)
If anyone has any tips on the best way to scan lenticular cards, please share them in the comments!
Total:429 cards

Posted by Jongudmund at 4:25 PM