One card only: Best of a Generation

This is a shiny foil card that my scanner didn't like 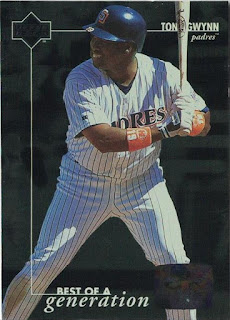 So, here's a photo of it as well 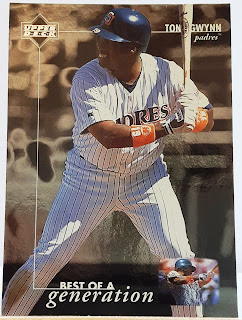 Even though his most famous achievements were still in the future, Upper Deck chose him as a player worthy of the label "Best of a Generation" - on the back they made clear this was the opinion of the Upper Deck Company! (Look under the numbers table!) 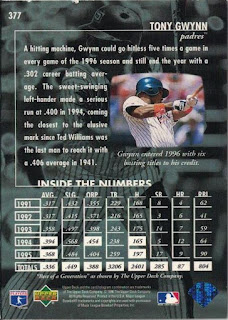 There is a comparison between Tony and Ted Williams, who recorded a season average of .406 the year before the United States entered the Second World War. This is just my opinion, but I feel comparing achievements in baseball in the 1940s and the 1990s isn't as easy as just looking at the headline numbers.

I'm not saying the game was harder 50 years later, but it was different, just like how certain parameters have changed in the game between the 1980s and 2020. In many ways you can only compare players within their generation. Tony won 8 batting titles, and hit over .300 for 19 straight seasons, and no one else in his generation managed that, which is why he deserves the label 'Best of a Generation'.