When Marc was offering me various insert cards recently, he mentioned he had one of the inserts on my secret hitlist of cards I wanted. It leaves me in a slight quandary because it's a card featuring another player, but with a cameo from Tony. What elevates this above cameos which I don't count in the collection is that the insert set is called Profiles by Tony Gwynn.

If your name is in the insert set then it counts as one of your cards, right? 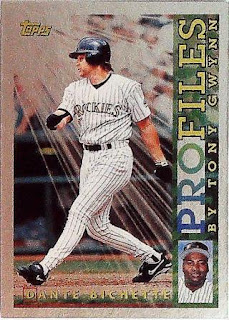 I had my overhead scanner out, so this card really pops in all its shiny glory. (I'm not even going to show you the flatbed scan. It was terrible.)
Dante led the National League in home runs and RBI the season before this card came out, so was a very suitable choice for Tony to profile in this insert series. Tony's insight on the back skirts around the issue that when he was playing for the Rockies, Dante played half his games in Denver and benefited from hitting in the rarefied air.
Tony manages to tactfully avoid casting shade on him for that, and actually makes the point that the benefit of playing in Denver is outweighed by putting a player into a 'can't win' situation with regards to their batting. 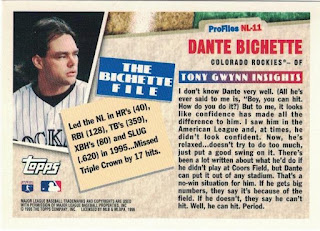 I didn't know before researching this post, but Dante was one of the first players to turn out for the Rockies in their inaugural season, and he hit the first home run in their franchise history. He still holds a number of batting records for them. I also learned that his first name is actually Alphonse. Nowadays, of course, he's also famous for being the father of Bo Bichette who is currently playing for the Toronto Blue Jays. There's a nice similarity there with Tony, who also had a son who played Major League Baseball.
Now I have one of these cards, I want to get the other 19, to see if Tony is as diplomatic about all the other players he profiles. I'm sure he was!
Total: 685 cards

Posted by Jongudmund at 7:38 AM