Unlike K-Mart and Woolworth's in the previous two posts, I have no memories attached to Hill's Discount Department Stores. They were a USA-only chain and had disappeared by the first time I went on holiday to the USA. Wikipedia tells me that Hill's started in the 1950s and lasted until 1999 when it was bought out by another company that then ceased trading not long after. 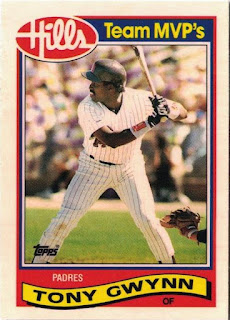 This is a solid card front, although the picture initially looked like it had been airbrushed. You can just about make out the beginning of the word 'Padres' under Tony's elbow though. The disembodied hand with the catcher's glove in the lower right corner is a fun additional touch. The frame lay out is very nicely designed, particularly the ribbon with Tony's name on.

The back is simple and effective. If you're going to show a stylised baseball field, then do it in green like this. 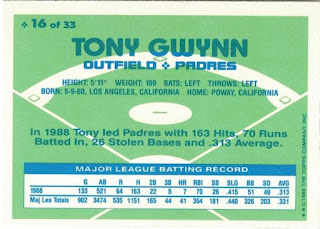 Tony had a difficult season in 1988 after winning the batting title in 1987 with a .370 average. He struggled with some injuries early on in 1988 and missed the All Star Game - it was the only All Star Game he was not selected for from 1984 to 1999. Even so, he ended up the Padre with the most hits, most RBI and stolen bases, although he stole less than half the number he had nicked in 1987.

Hills did another set the following year of 'Hill's Hit Men' but Tony wasn't included in that set. So, from my perspective this card means I have another complete run.

I'm sure someone somewhere has done a project cataloguing all the small standalone sets that were sold during the baseball card boom of the late 1980s. Fleer usually produced a few sets each year, and Topps were producing sets like this for several different retailers. These sets offer something a bit different for collectors and they also act as a reminder of shopping before the Internet when there were these things called shops.

Posted by Jongudmund at 8:26 AM