A sequel to yesterday's blog post about Post Cereal cards. Today we look at cards produced a few years earlier by a rival company - Quaker Oats. (I realise I have done these in the wrong chronological order. Oh well.)

I was surprised to learn that the Quaker Oats Company was not founded by Quakers. The founders just adopted the name because the Quaker sect had a good reputation for honesty and purity. The Quaker in their logo isn't based on a particular Quaker in the current design, but originally he was sort of based on William Penn, founder of Pennsylvania. 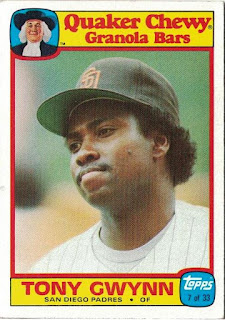 Tony looks a bit downbeat in this photo. At least the Quaker mascot looks cheerful. Because this card was produced by Topps it was fully licensed, so the SD logo on Tony's had didn't need to be airbrushed off.
On the back these were proclaimed as the 1st Annual Collectors' Edition. It was actually a one and done because a second series was not released. 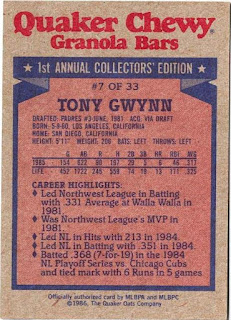 You can almost tell this card is produced by Topps just by looking at the factoids. This card was in packs of chewy granola bars in 1986, but the factoids only run up to 1984 and the first two are from 1981! (And why lead with those when Tony had played in a World Series in 1984! Topps's approach to factoids in the 1980s was downright bizarre.)
Card Number 692: Cap'n Crunch, 1989; #5
Yes, the Quaker company also make Cap'n Crunch. 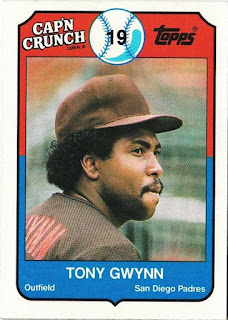 Cap'n Crunch's Wikipedia entry has a very entertaining section about the product's marketing, including the complex naval world of the Cap'n and his crew, which I think is mainly one dog. We never had this cereal in the UK, so it's not something that's part of my cultural landscape seascape.
I'm disappointed that the Cap'n didn't appear on the front of this card with Tony. Or anywhere on this card. I'm also disappointed that the prominent #19 on the front is not actually the card number. (Booo, Capn'n Crunch! Booooooo!) 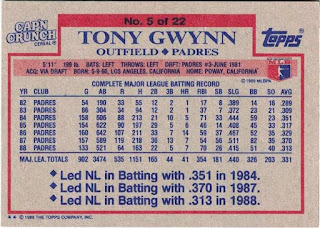 The factoids on the back are more up-to-date than the Granola Bars card, but that list looks like a cut, paste and change the numbers job. (Were people able to do cut'n'paste in 1989?)
A batting average of .313 is quite low to win a batting title (1988) and is 25 points lower than Tony's career average. He certainly scored a lot higher in other seasons and didn't win the title.
I've put these cards in the same binder page as my five cards issued by the Post company as a mini set of cereal cards. There are also some more 'food issue' cards to share with you in future posts. But for now, I hope you had a good breakfast and have a great day.
Total: 692 cards

Posted by Jongudmund at 8:21 AM