The evolution will be digitized

Today's card is the first of 3 Tony Gwynn cards that arrived at the weekend from Marc, who was having a clear out of his inserts, parallels and so on, and sent me a big box of Padres cards. 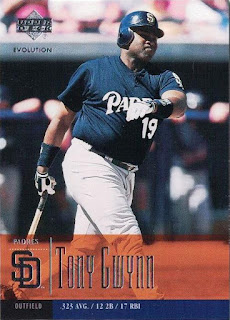 Upper Deck Evolution was a fairly unremarkable set of 120 base cards. Tony was one of only two Padres to feature in the set. I'll let you have a bit of fun trying to guess the other player. (Answer at the bottom of the post!)
The set had bat and shirt relic cards in and what I think might be the first "E-cards", where you revealed the code by scratching off a panel and then could "digitize" your card on Upper Deck's website. There were 15 players featured on the E-cards, which also had reprints of older Upper Deck cards along with the scratch off and digitizing details. Tony didn't feature in any of the insert sets.
The cardback notes that Tony's approach to hitting was "Legendary" and that he was the active leader in batting average. It also foreshadows Tony's election to the Hall of Fame by six years. 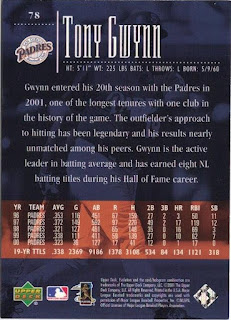 So, despite being a fairly nondescript card, the Evolution set itself was interesting in terms of the historical development of cards. In terms of evolution, these cards seemed to be what biologists would call a 'dead end' or a cul-de-sac, as they didn't last long. Card companies keep trying with electronic cards, though. Topps are even giving it another go with their NFTs at the moment.

(Answer: Did you guess the other Padre in the set was Phil Nevin? Because that's who it was.)

Posted by Jongudmund at 7:24 AM