The first Classic cards were produced in 1987. 100 cards were shipped with the game and the company then sold expansion packs containing more cards. Tony had a card in the original set, which I blogged about here.

Classic released two more expansion sets in 1988, and the cards were sequentially numbered on from the original game. 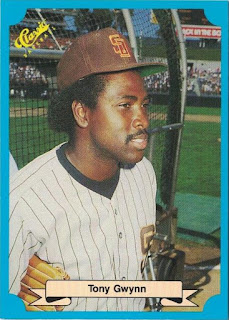 This photo is at a slightly odd angle but features what looks like a batting cage and a prominent advert in the background for Jack in the Box resturants.
The back isn't particularly inspiring. There is a bit of player data, but the majority of the space is saved for the questions that would be used as part of the game. There is also a space for an autograph. 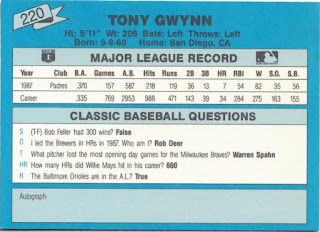 Trying to reverse engineer what the game looked like, I'm guessing it was a bit like Trivial Pursuit and questions were in different categories. That's an interesting factoid about Hall of Fame pitcher Warren Spahn.

Game Time carried on producing expansion sets each year for a few years into the early 90s. Having a limited checklist meant that only a few players from each team featured. However, Tony had a card in the 1990 set as well.

The three expansion packs released by Game Time in 1990 were different sizes - 150 cards, 99 cards, and 50 cards respectively. This card is from the first set released. Tony's brother, Chris Gwynn, was also in this set of cards. 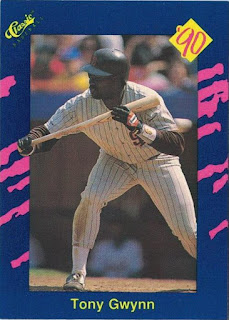 With it's hot pink scribbles, I don't think the designers could make this card could look more like it was from 1990 if they tried. It's a great bunt photo of Tony, which makes it a bit special. I'm blogging this in quick succession to another bunt photo on an oddball card.
The trivia questions on the back includes a reminder of a time when Montreal had a baseball team. 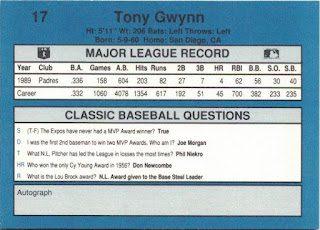 The Lou Brock Award is still given out every year. I have to admit, I hadn't heard of it. Vince Coleman won it six times in a row in the 1980s. No wonder he was labelled "the thief" on a baseball card.

In terms of this blog, I am tantalisingly close to blogging my 700th Tony Gwynn card. However, I am taking some much-needed time out next week. I'm also planning to watch some more games in the UEFA European Championships (which is another reason my blogging has been erratic of late!)

I will be back blogging in early July to reveal card number 700 and also the few remaining cards in my yet-to-be-blogged folder. See you next month!

Posted by Jongudmund at 7:46 AM