Back in November (I think), my friend Gawain bought a job lot of cards for me on eBay and sent them to his US shipping address. It was one of those lots that cost pennies in the USA but shipping it over would have cost a fortune in fees. And so they sat in Gawain's mailbox until he had enough stuff there to ship it all to the UK and they arrived last week.

I had actually forgotten all about it until Gawain started sending me photos of the cards.

The cards are mainly oddballs, promo cards and "food issues" - cards that are easy to obtain in America but harder to find over here. Well over half the bundle were new cards to the collection - in fact there were 19 new cards, which feels wonderfully symbolic. That also takes me over another century mark.

I thought I'd start with a couple of odd-sized cards, for fun. 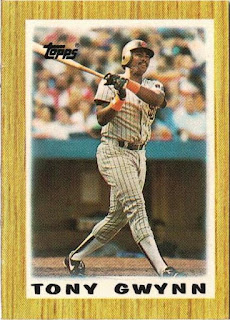 I am nostalgically fond of the 1987 Topps design with the wooden border, and I'm glad Topps used it on this set of smaller sized cards. The front is very different to Tony's base card in the Topps flagship set because you can actually see his face!
The back looks similar to other Major League Leaders cards. In 1986 Tony had the most hits and tied for the most runs but was only third in batting average. 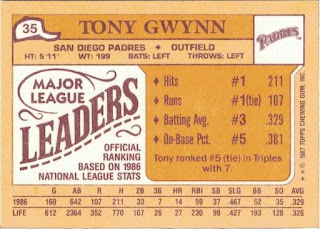 One other thing I noticed is that the two line stats box has his stats for the previous season and for "life" not "career". I wonder when Topps stopped using "life" in this way.
Card Number 687: Topps Mini, 1989; #36
Another "mini" card - this is listed on Trading Card Database as "Topps UK Mini", but when I blogged about the card from the previous year's set I just called it "Topps Mini". 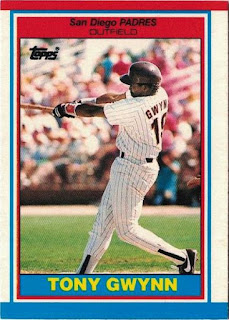 When I blogged previously about a mini card issued in the UK, I mentioned buying a packet of similar sized NFL cards in a shop while on a school trip in 1986. I didn't realise until much later that Topps had tried to sell baseball cards here in the 1980s as well.
There was a boom in interest in American sports in the 80s - in school we all knew who The Refrigerator was and that he played for the Chicago Bears. I doubt anyone actually watched any NFL. Maybe the Superbowl was on TV back then. If so, it was niche viewing, not the hyped event it is nowadays.
The UK minis rarely appear for sale in the UK Facebook groups. In fact, I have only ever found them for sale 'in the wild' once - at a collector's fair with lots of cigarette card sellers and stamp dealers. If this was sourced in the UK originally, then it has crossed the Atlantic twice!
On the back of this much-travelled card, there is a panel explaining baseball terms - I think these would have been quite helpful for UK consumers back in the 80s. 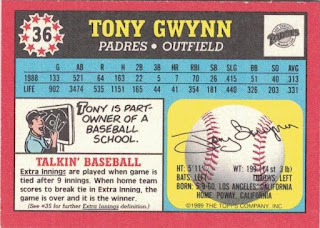 There is also a cartoon, of a teacher at a blackboard to illustrate the 'school' that Tony part-owned. I think Fuji, who is an educator, might like this!
Total: 687 cards

Posted by Jongudmund at 7:41 AM