One card only - parallel persistence

Last week when I blogged about this year's Stadium Club card of Tony, I mentioned how Marc had also offered me a copy of the card, which I declined. However, a couple of days later Marc messaged me asking if I had the 'red foil parallel' version. And I didn't.

So, a big thank you to Marc for his persistence in offering me cards! 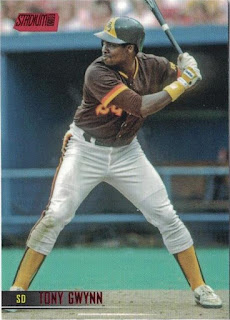 The only difference between this card and the base card is the red foil Stadium Club logo and Tony's name in red foil too.
This is one of 17 parallel sets that are available in this year's Stadium Club release. I have a theory that somewhere in the multiverse is a parallel universe where Topps only release one version of their cards.
The back is the same as the base card. I have already discussed the factoids. 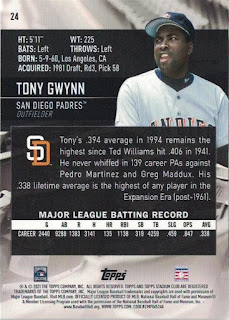 This time around I noticed the one line stats box. I really approve of that on a card of a retired player. It's all the information that's needed.
Thanks again, Marc!
Total: 707 cards