I recently bought a small lot of Padres cards on eBay. It was an assortment of parallels from a number of sets and it included some base cards from the Panini Diamond Kings set released this year. I already had a 2021 Diamond Kings insert featuring Tony, but I didn't have his base card. I do now. 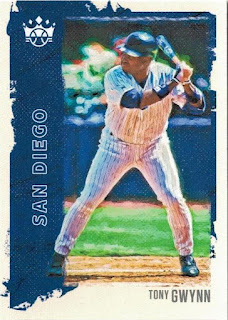 It's a fairly normal Diamond Kings card front. Nothing too complicated. It has a nice finish on the card front; a sort of matt canvassy effect.
The cardback is a bit plain, with some purple prose in the write up. I grew up in a religious family and am used to the phrase "The Lord giveth; the Lord taketh away". It's amusing to see the same thing said about Tony. 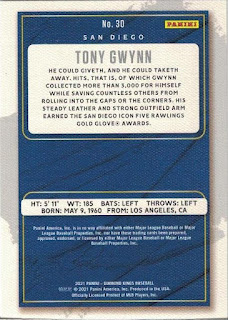 We established last time I reviewed a Diamond Kings card that the characters next to the copyright notice are Chinese. I'm waiting for the day when Tony appears on a card written in one of the Asian languages. Topps have done some Japanese cards before but Tony wasn't included. I'd love to be able to add that to the French and Spanish language cards I've got already.
Total: 708 cards

Posted by Jongudmund at 7:54 AM