The thing about kings and queens is that as soon as one dies or abdicates, the next person in line instantly becomes king or queen. There is always a monarch. That's a change that nobody had experienced in the UK for 70 years but now everyone is having to get used to it fast.

After yesterday's tenuous link between the monarchy and baseball cards, here's another card that is roughly keeping in with the theme of crowns.

Rather than being an insert set, the ten cards of players given a "Season Crown" were included as a subset within the main set. This is the parallel 'gold medallion' version of the card. (Yet again, I seem to have the parallel and not the normal base card.) 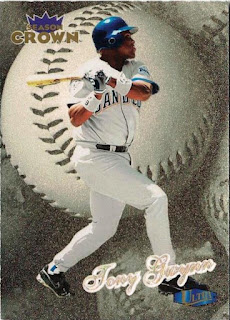 The design of this card would fit into my much smaller collection of 'cards with a giant baseball motif. I like it as a design choice.

Tony won what would turn out to be his final batting title in 1997, with over 200 hits. 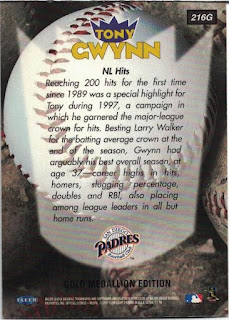 I'm awarding this card a bonus point for adding 'G' to the card number to show that it's a parallel. Fleer often showed kindness like this to collectors.